Big news in the small world of long drive: the World Long Drive Championships are moving to Golf Channel (from ESPN).

Will this be good for golf?

I think yes. Here’s why.

As we continue to growing the game of golf, players will always to be drawn to the allure of distance.

We all love distance. Hit it far and you shorten up the hole. Hit it past your buddies and you get respect. Crush it dead square and there is no sweeter feeling.

There’s something mesmerizing about watching a drive soar straight and long down the fairway. Visit any driving range and the majority of golfers will have a driver in their hand.

What the new Golf Channel contract will do is bring the excitement of long drive to a whole new audience. As is true for any sport, television really brings the sport of Long Drive alive for people – not only the mesmerizing distances that are being achieved, but also the personalities of those who are pushing the envelope.

ESPN has been great for long drive for 17 years. But look at what the Golf Channel has been able to accomplish with shows like Big Break, Chasing the Dream, the Haney Project, the Feherty show, Morning Drive, and other shows.

It’s the stories behind the story that really grab us.

And trust me, having been in long drive for 10 years, there are plenty of stories. Back in 2003 when I won my first championship, ESPN broadcasted my win — as well as my marriage proposal from the tee (see “the real prize” video clip).

So I believe the Golf Channel partnership will help build interest in long drive, and in so doing help to bring new golfers into the game, plus re-ignite the passion of existing golfers. After all, look at what Charles Barkley did for the game: his swing was so bad and his failure so epic that he had millions of golfers saying “Even I can do better than that.” and they were encouraged to get back into the game.

Then there’s the equipment side. Long drive is to golf like Indy cars are to the automobile industry: innovations tested at the extreme edge of performance eventually trickle down to improve performance at the consumer level.

I’ll give you a couple of examples: 10 years ago the graphite shafts we used wouldn’t stand up to the swing speeds we generated. I was breaking one or two shafts a month. So the shaft manufacturers innovated, doing things like adding boron strands to the tip section and reinforcing the weave of the graphite sheets. Today we have shafts that are lighter and stronger, giving every-day golfers more club head speed with a livelier “kick” that produces more distance.

In another case, the “No Brainer” club head I used took Steve Almo from Geek Golf two years to design and test. But the weight distribution configuration he achieved put more mass behind the sweet spot, and the result gave me a club I hit not only farther, but straighter too – results we documented by testing hundreds and hundreds of drives on a launch monitor.

This site uses Akismet to reduce spam. Learn how your comment data is processed.

THINGS TO DO ON THIS SITE 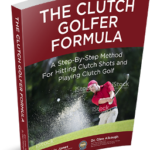 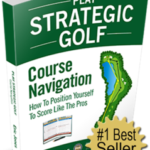 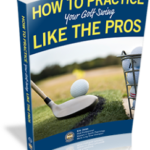 "Eric, This is superb instruction. Very clear and easy to understand. I have countless books and videos on golf instruction but you are the first person to explain these principles so clearly. I have been struggling for years with hitting from the top and now after watching just a couple of videos I have very clear idea of how to finally overcome it. Thank you very much." Don

"Eric - After the dozens of lessons I have had from accomplished PGA pros and the hundreds of hours I have spent practicing my swing I did not believe I would ever be able to overcome my obsession with the mechanics of the swing. Nor did I believe it was even possible to will myself into “the zone” and, potentially, stay there for long periods in spite of the chaos going on around me. Nor did I believe I could apply the concepts involved in the full swing to every part of my game with ease and immediate results. After reading The Five Keys to Distance and practicing your drills for a few months I now know I was wrong on all counts! Your methods are pure genius!" JM

Hi Eric, "I wanted to send you a big thanks to your 5 Keys to Distance program. It has done two very important things with my golf. The first is that it has increased my ball flight carry by 10% in only a few weeks. And secondly and the most satisfying is it has given my whole golf game in particular my shots from scoring range (100 yards and closer to the green) pure control with my centered balance. So I can't thank you enough. Your balance drills I do without fail each morning before breakfast, and it will continue to be my daily routine. Without Balance The Club Can Not Swing!! Kind regards." Clayton P.

"Eric, I know you promised me 20 more yards with my driver. I'm actually getting more like 30 yards and sometimes even 50 more yards. But what you didn't mention is the added distance WITH EVERY CLUB IN MY BAG! I'm hitting all my irons at least one club longer, plus I'm really compressing the ball now. It's so much fun! You should tell everyone about this "extra" benefit from your program!" Gerry M.

"Eric, I have to tell you that I’m absolutely delighted with your drills. They make perfect sense to me, and I’m actually enjoying doing them because I can tell intuitively that they will make a real difference. I have for a long time avoided going to the range because I felt that I was simply reinforcing my mistakes. I am going to the range now with quite a different attitude because after only two sessions on the range I can see improvement already. I’m determined to keep up with the drills, and I can tell you that your presentation of them is excellent. I’ve had lots of lessons in the past from some of the best "swing gurus" in the world. But none of them have made a real difference to my swing like you have. I’m very excited now because I can already feel the difference. Best wishes" Jeff W.

“Eric, After several weeks of study and practice on the first section of BLAST the results have been OUTSTANDING! At age 73 my driver length ranged between 175 yards and 210 yards. Now with some extensive training from you the distances are ranging from 220 yards to 255 yards. The 255 yd. distance was achieved after working on the BALANCE, LEVERAGE & ARC WIDTH drills. Thank you for your help. I almost resigned myself to play from the seniors tee or give up golf!” Dick B.

"I just wanted to follow up with you regarding my progress while using your program. After just 3 months I am seeing a lot of new and exciting things happening to my golf swing. I find that I am hitting all of my clubs longer and more squarely than ever before. Every shot I hit now feels like it is hitting the sweet spot and is going very straight. My club head speed use to be about 90 mph now my club head speed is on average 110 mph. The main key for me was increasing my hip speed and reducing my grip pressure. My old swing was very arm dependent and now it feels like I can swing much faster with a lot less effort. Thank you again for your great series." Jorge O.

"Hi Eric, I recently purchased your instructional videos on Long Drive. They are the best golf teaching tool I have ever found. Your explanations of what to do and why are outstanding. I am a structural engineer and have a good understanding of the physics, mechanics and dynamics of the golf swing, so your explanations are especially meaningful to me. At age 63, I am still reasonably fit and strong, and your instructional videos have increased my average distance per club by 15 to 30 yards. Thanks for excellent videos!” Barry

Hi Eric, "I ordered your book and DVD a few weeks ago and I'm getting a lot out of it! I'm going very slowly, but thoroughly. Thanks very much for writing it. I've read tons of golf books, but no one has ever put as much emphasis on balance and FEELING what the body is doing during the swing. The drills bypass the intellect and force the body to "get it" directly." Pete

"Eric, I received your book yesterday and have been reading it and highlighting ever since. Your book, DVD, and interviews are awesome!! Just what I have been looking for a very long time. I can tell already that I need to build up some stabilizing muscles in my body. Thanks again for your dedicated research and sharing this incredible book with your fellow golfers." Mike P.

“Just want to tell you that I've been doing the drills for a few weeks now, up to the swing arc drills, and am noticing much improvement at the range. I can't wait to take it out to the course. Thanks for simplifying golf instruction for me!" Rick P.

Dear Eric "Instantly you made the game fun again. The consistency was amazing, both as to direction as well as trajectory and shot shape. Even the sound of the iron shots was much better. Thanks for an exciting round. I love working through all the steps and drills. Greens in regulation are now the rule and not the exception. More distance, less effort, more accuracy, no sore muscles, more fun." Ron G.

"Eric, best investment I've made so far in all the you know whats out there. I played nine and was nailing my tee shots like I haven't seen in ages. I haven't been more encouraged ever." Peter S.

"Eric, You have an uncanny ability to break down the components of the golf swing into simple terms with great clarity. I gain additional insight each time I read your book “5 Keys to Distance” and review this video. Thank you soooo much. When is your next book coming out? Please put me down for the first release." Orson L.